So here I am, reviewing southern gothic novels on the internet, and I’ve never even read Midnight in the Garden of Good and Evil by John Berendt. Now, one thing I need to clear up: this isn’t technically a southern gothic novel, though it’s often associated with the genre. I’ve always heard this tossed about as a must-read for those interested in southern gothic, even though it’s actually a disjointed and rather elegant nonfiction novel.

So why southern gothic? Why does this association exist, and should it be considered a staple? 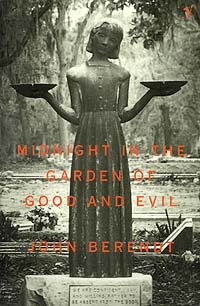 In this series, I’m going to explore that question, as well as give my thoughts on Midnight as I read through it. I’m pretty excited, too. This book used to sit on my mother’s bookshelf in the living room, alongside The Foxfire Book and Memnoch the Devil. I used to gaze at those mysterious books, allured by their supposedly forbidden contents, knowing that I was too young, and fearing the Hell that my grandmother promised if I ever strayed into such evil.

I saw no evil – only fascinating covers and tantalizing titles. I still remember the statue from the cover of Midnight staring back at me, inviting me in. In fact, I associate it so strongly with my mother that I did a similar pose in one of my wedding photos as a bit of a nod to her (and if you’re reading this, Mom, I hope you liked it). Put plainly, this should have been on my reading list 15 years ago. But somehow, it slipped by.

Now, I’m finally going to start it. I’ll be writing this series as I go, and I invite you to join me, should you feel so inclined. Each update will cover three chapters of the book. Keep an eye out here! Let’s enjoy a mystery together.