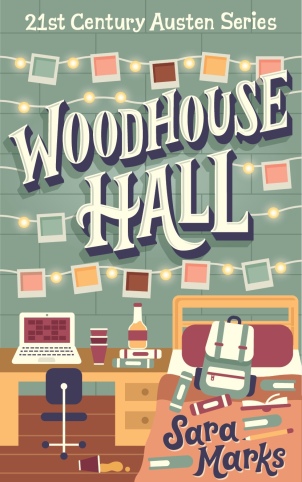 As the year comes to a close, so does the publishing year for member Sara Marks. Aside from two short story collections and four novelettes, she has been busy working on the third novel in her 21st Century Austen series.

Amelia is stuck in the worst dorm on campus for a whole year! She’ll have to make the best of it in Woodhouse Hall and her roommate Jenna will be her new best friend, Amelia’s sure of that. Jenna’s sweet personality and openness to new things incite the matchmaking-genius in Amelia to find the perfect boyfriend for her new bestie. She shoots high by attempting to entice Eric, the President of the Student Government, to fall for her roommate. Amelia’s past success makes her confident they will be a couple in no time. When that turns out to be a disaster, she is forced to face the lies she’s told herself about her strengths and her assumptions about the people she loves. Over the year, Amelia learns who she is, what she wants, and how to fight for what’s really important.

This novel, inspired by Jane Austen’s Emma, will have you laughing, crying, and finding a little of yourself in one or all of the characters.

Woodhouse Hall was released in October and is now available in ebook and paperback from all major retailers!